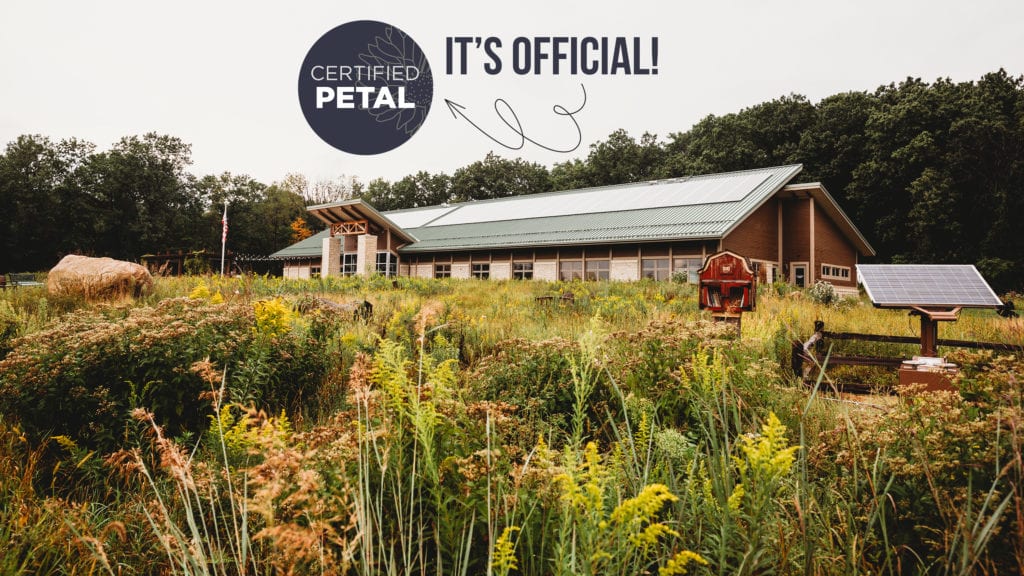 Indian Creek Nature Center (ICNC) has reached an incredible milestone: Amazing Space is officially Living Building Challenge (LBC) Petal Certified, making it the first and only Petal Certified project in the state of Iowa and one of only 31 in the world, 24 of which are in the U.S.

Amazing Space now stands on the global stage as a model for comprehensive, sustainable design. By adopting and promoting regenerative building practices, Amazing Space sets the example for other businesses and individuals on how to implement these or similar practices themselves.

“Amazing Space is a catalyst for community and the environment,” said ICNC Executive Director John Myers. “By connecting people with the natural world, we are educating and inspiring others to become champions of nature. Whether this is through programs on beekeeping or wetlands, yoga classes, farm to table dinners or even a wedding, Amazing Space not only wows people, but inspires them to take action.”

Amazing Space achieved six of the seven LBC petals, including Site/Place, Water, Energy, Health, Equity and Beauty. For a more complete breakdown of these petals and what we did to achieve them, visit indiancreeknaturecenter.org/about-us/amazing-space/.

ICNC has long been a leader in innovative sustainability practices. Since its founding in 1973, the Nature Center transitioned farm land back to native prairie in the 80s, was the first to install a net-metered solar panel system with Alliant Energy in the 90s, and has grown to include nearly 500 acres of land under its management and protection. When plans were made to build Amazing Space in 2016, those progressive practices were taken a step further.

“When we set out to build Amazing Space, it became apparent that we needed to continue this legacy of forward-thinking sustainability practices,” Myers said. “After initially considering LEED building certification, we quickly realized the need for a program that is more robust and approaches the building as a regenerative part of the environment.”

The Living Building Challenge (LBC) certification offered through the International Living Future Institute (ILFI) quickly “rose to the top,” Myers added. The ILFI is an environmental NGO committed to catalyzing the transformation toward communities that are socially just, culturally rich and ecologically restorative. The LBC certification is the most ambitious performance standard for building design, and its rigorous standards challenge buildings to regenerate, not degrade, the environment.

In the three years since Amazing Space’s grand opening in September 2016, ICNC staff have collected data and reviewed every aspect of the project with an independent audit team to ensure the building met LBC standards.

“From the first idea through final certification, Director of Land Stewardship and Amazing Space Project Manager Jean Wiedenheft invested thousands of hours to achieve this goal,” Myers said. “Her efforts propelled us forward and turned an impossible vision into a reality. She should be commended for the lasting impact she has made on improving the environment.”

“Earning this certification has not been without its challenges, but the reward of creating something that will benefit the environment and the community for years to come is unmatchable,” said Wiedenheft. “We are, after all, a nature center. Of course we should be on the leading edge of sustainable design and the green construction revolution.”

ICNC staff were not the only people to contribute — it has truly been a community effort to reach this goal. Solum Lang Architects worked hard to plan and execute Amazing Space. General contractors Ryan Companies, Rinderknecht Associates and many union members constructed the building. More than 400 individuals, businesses and foundations invested $7.6 million in the Amazing Space campaign.

Today, ICNC and community partners celebrate a successful effort in pushing the envelope for sustainable design.

“Our promise to deliver a Living Building Challenge Petal Project was a lofty goal, but one that many believed in,” Myers said. “We thank each and every one of you for your tremendous support.”