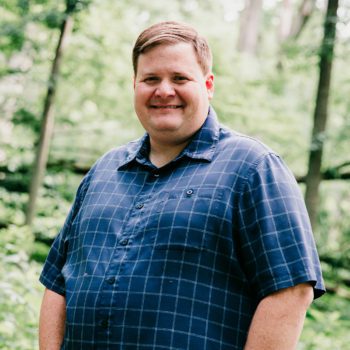 John Myers has been executive director of Indian Creek Nature Center in Cedar Rapids, Iowa since May 2013. Working with the organization’s board of directors, John leads the strategic planning and growth of the organization ensuring that its vision to create champions of nature is achieved. John believes that Indian Creek Nature Center can and should be a leader in the outdoor field by championing new and innovative initiatives that make substantive change.

He currently is championing two projects. The first is a running a 12,000sq ft, NetZero energy and water facility, one of the most sustainable buildings in the United States which is under certification review by the Living Building Challenge. John led the fundraising and construction of this $8,000,000 project. The second is developing a 200 acre farm focused on restorative, organic agriculture. Sugar Grove Farm will set the organization as a leader in restorative agriculture in Iowa.

He has a bachelor’s of science degree in business administration and is an Eagle Scout. Prior to joining Indian Creek Nature Center John worked for the Boy Scouts of America, as well as several other nonprofits in the Eastern Iowa area. He is active on the boards of Monarch Research Project and Greater Cedar Rapids Community Foundation’s Nonprofit Network, among others. John is an active member of the Association of Nature Center Administrators (ANCA). He was selected to receive the 2016 ANCA Outstanding New Leader Award recognizing his leadership and growth of Indian Creek Nature Center.

John and his wife, Meridith, reside in Marion, Iowa with their three children, Angela, Ryan, and Jackson. 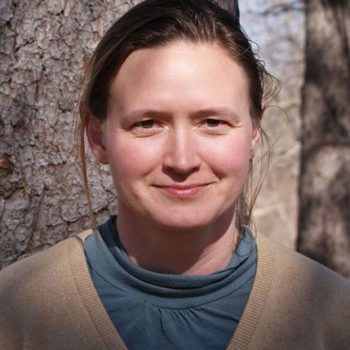 Jean Wiedenheft started as a volunteer at the Nature Center, helping with scout workshops and spreading wood chips on the trails. She’s been a full-time employee since 2001, sharing her enthusiasm for nature with volunteers and visitors. She enjoys horseback riding, beekeeping and walking in the woods. 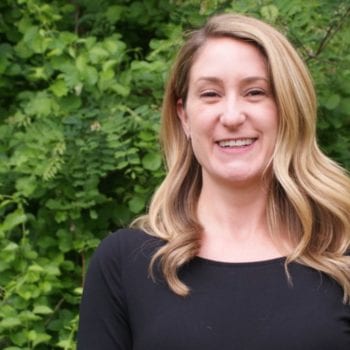 Sarah Halbrook joined the staff of the Indian Creek Nature Center in 2017 after several years of service as a board member and Development Committee Chair. Her service to the organization led to a desire to work daily toward the mission of creating champions of nature. Prior to joining Indian Creek Nature Center Sarah worked for Cedar Rapids Bank & Trust and United Way of East Central Iowa. An avid follower of politics and public policy, she has also volunteered and worked for many local and state level Iowa politicians and grassroots organizations.

She is a board member of Legion Arts and most recently chaired their Development Committee. She continues to serve on local committees and initiatives in the Cedar Rapids area.

Sarah is a graduate of University of South Florida and the AmeriCorps (National Readiness and Response Corps). She grew up in the Tampa area rollerblading, hiking and deep sea fishing. Sarah happily calls Cedar Rapids her home with her two lovely children, Leo and Willa. 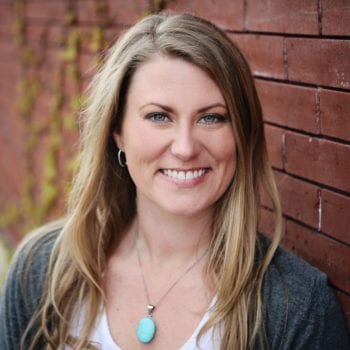 Kelli is an Iowa native, raised in northeast Iowa and living in Linn County for the last 15 years. She and her husband, John, reside near Mount Vernon and are in the final stages of building their dream home – a small log cabin in the woods.

Kelli’s professional background is in public education, having spent a combined 10 years as both a high school language arts and journalism teacher and a coach for beginning teachers. She received her undergraduate degree in journalism education from Wartburg College, and her graduate degree from Coe College in education with an emphasis in language arts. Kelli also has extensive training in social-emotional learning, curriculum design and implementation, and building the capacity and autonomy of teams. She and John also own The Sustainable Couple, a sustainable living blog. Joining the Indian Creek Nature Center as Director of Education is really the blending of her professional and personal skills and interests.

For fun, Kelli enjoys vegetable gardening, cooking, beekeeping, her backyard chickens, motorcycle rides with John, and spending time with their two dogs. You can often find her at area farmer’s markets, volunteering at her church farm, or catching live music in the Corridor. 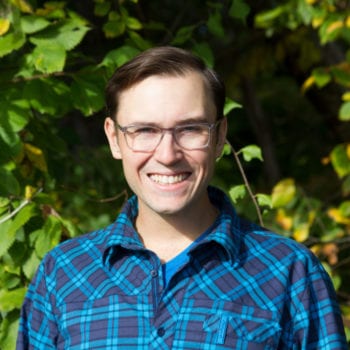 Jason Bies grew up in rural western Michigan and received a B.S. in Ecology and Evolutionary Biology from the University of Michigan. He joined Indian Creek Nature Center in 2017 after settling in Iowa City in 2016. Look for him while you’re out on the trails, where he’ll be controlling invasive species and keeping the grounds in good order. In his spare time he enjoys reading, spending time with his family, and all manner of outdoor activities — canoeing, camping, and mushrooming being among his favorites! 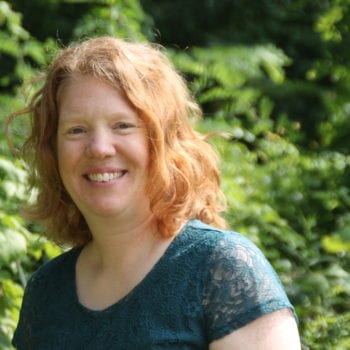 Sarah grew up on a farm in central Illinois raising sheep. She received her B.A. from Monmouth College and her Masters from Kansas State University. After spending 18 years in Student Affairs in the Higher Education setting, Sarah joined Indian Creek Nature Center in August 2018. She enjoys traveling, bike riding and reading a good book. 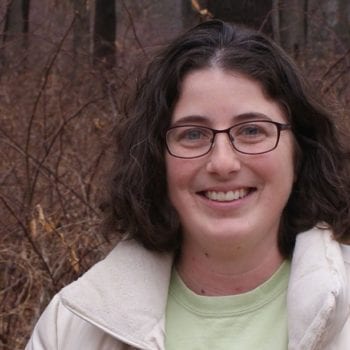 Andria Cossolotto, a graduate of the University of Northern Iowa, came to Indian Creek Nature Center in May of 2016 having previously been a naturalist in western Iowa. As a Naturalist at ICNC, Andria leads school field trips and camps, helping to instill the love of nature in future generations. In her spare time, Andria works to help improve pollinator habitats and enjoys getting outdoors with her husband and two children whenever possible. 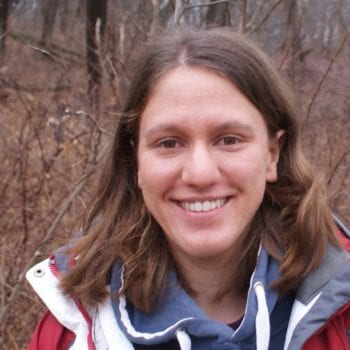 Emily Roediger is originally from Rochester, Minnesota. She graduated from Gustavus Adolphus College with majors in Biology and Environmental Studies and minors in Geology and Music, and has an environmental education graduate certificate from Hamline University. She has over 4 years of experience with multiple environmental education organizations, and is excited to be at Indian Creek! Emily enjoys being outside whether she’s hiking and exploring new places, camping, playing tennis, bike riding, or even just sitting! 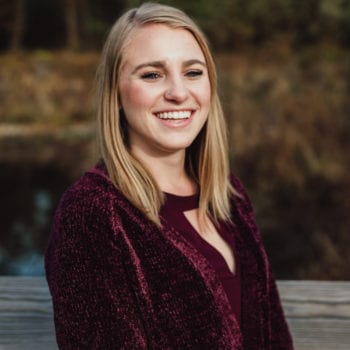 Liz Zabel, a Minnesota native and Iowa State University graduate, joined the Nature Center staff in 2018. She is a former journalist turned marketing whiz and a photographer, videographer and all-around storyteller. Liz cares deeply about protecting our planet and is proud to promote Indian Creek’s mission to create #championsofnature every day. When she’s not working, Liz enjoys spending time with her husband, fur-children (a dog and two cats) and friends; getting outdoors as often as possible by gardening, camping, hiking, paddling and generally exploring. She also caught the wanderlust bug and loves to travel every chance she gets — let her know where she should go next! 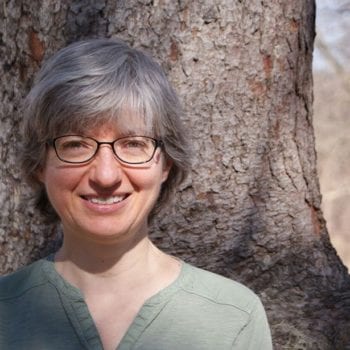 A native of southern New Jersey, Nancy moved with her family to Cedar Rapids in 1970. She has two bachelor’s degrees, received 14 years apart, in vastly different fields: business administration with an English minor; and biology and general science. Nancy joined the Nature Center staff in 2000 and her responsibilities involve all aspects of fundraising, overseeing memberships, and managing the donor database. Nancy enjoys exploring nature on foot with her husband and their enthusiastic dog. 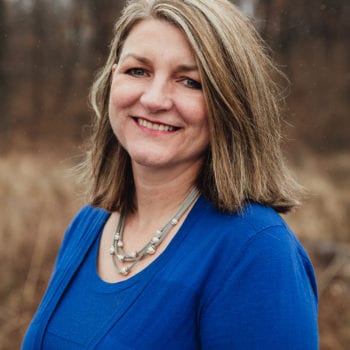 Jane Schlegel grew up in a large family on a farm near Ryan where she learned to appreciate and be a good steward of the land and resources from her parents. Joining the team at the Indian Creek Nature Center gives her an opportunity to help others foster that same appreciation and connection with our natural resources. Prior to the Nature Center, Jane graduated from UNI, was successful in the business world, working at KCRG and most recently as a financial advisor. She gives her time to her church, Rotary West, Chamber Ambassadors and various other non-profit organizations. She has lived in Cedar Rapids for over 25 years and enjoys baking, reading, golfing, camping, playing board games and cards, and spending time with her husband, Scott, and children, Katie and Matt. 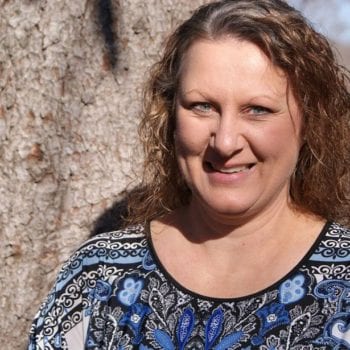 Dana Wood grew up in Center Point, Iowa. After college, she spent several years at Weddings, Etc. working as a seamstress. A career change made her Administrative Assistant at Global Crossing where she stayed until becoming Office Manager at Indian Creek Nature Center in 2002. Dana enjoys volunteering and coaching at her children’s school, sewing, swimming and camping. 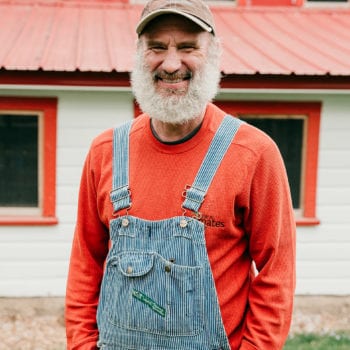 Scott has served on several boards of directors. Currently, he is the facilitator for the Linn County Food Systems Council. He holds membership on the Johnson County Board of Supervisors’ Juvenile Justice Youth Policy Development Board, and on the Advisory Groups for CGRER (Center for Global and Regional Environmental Research) and Kirkwood Community College’s Agriculture and Horticulture Departments.

He is a 2019 recipient of the Iowa State Education Association’s Friend of Education award, a 2018 community service award from the Greater Cedar Rapids Community Foundation, and he holds certification from A.C.E. Interface as an official presenter of adverse childhood experiences research. Scott is a frequent panelist at regional conferences, and is a guest columnist for the Gazette Writers’ Circle.

Scott is an Iowa boy, raised in Cedar Rapids, and thrilled to be home, modeling biodiverse agriculture at Sugar Grove, honoring the legacy of the Etzel family, and partnering with the esteemed Rodale Institute. He is a graduate of Iowa State University, and lives at Sugar Grove with his trusty guard dog, Blue. 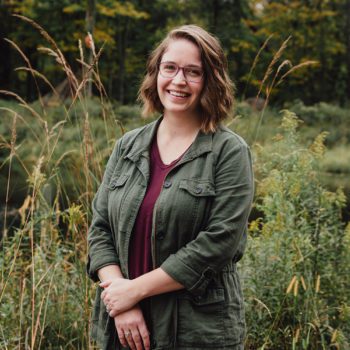 Rachel Bailey was born and raised in Cedar Rapids. She received an English degree from Mount Mercy University and has a background in marketing and nonprofit work. Rachel is eager to connect with visitors and foster a love for nature and preservation. In her spare time, she enjoys quality time with with her daughter, husband and golden doodles (especially around the campfire)! 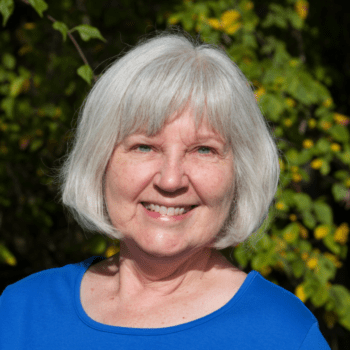 Barb retired from teaching at the Anamosa State Penitentiary in December of 2015, and was hired as a Guest Services Associate shortly thereafter. She’s been a teacher all her professional life, and continues in this endeavor as she shares the wonders of the Amazing Space with guests. She lived in cities all her life, so had limited outdoor experiences, but these days she encounters nature in the gardens she’s created in her front and back yards. 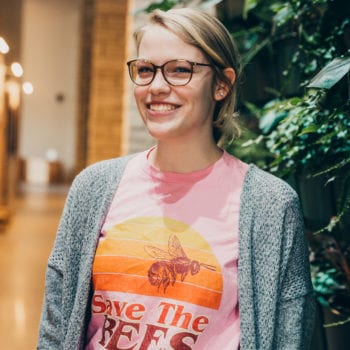 Katie grew up in Marion, Iowa and has been visiting the Indian Creek Nature Center her whole life. She is currently attending Iowa State University and is studying civil engineering. Her love for sustainable buildings and living is what brought her back to the nature center and its new building. She hopes to someday integrate sustainable designs and techniques into new buildings and construction. She enjoys spending time with friends, anything on the water, live music, and learning new ways to benefit the environment. Katie has been greeting guests and sharing facts about the nature center since May 2018. 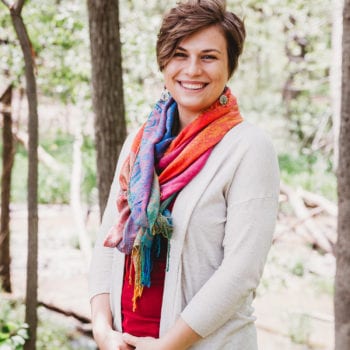 Betsy is a northeast Iowa native and has lived in Cedar Rapids with her husband Levi for the past two years. Betsy graduated from Loras College in 2010 with a degree in social work and sociology.  Betsy enjoys spending time in her vegetable garden, canning, fermenting, and baking sourdough bread. You may also see Betsy working at the Cedar Rapids Public Library or riding her bike around Cedar Rapids. Betsy started working as guest services associate in May of 2019 at the Nature Center. 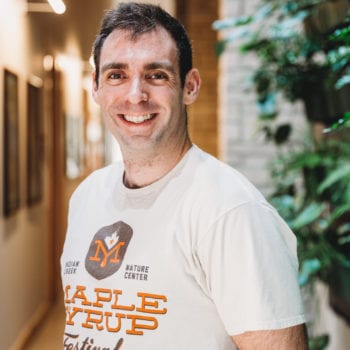 A Cedar Rapids native, David has been volunteering at the Indian Creek Nature Center ever since his high school internship in 2001. He graduated from Upper Iowa University in 2007 with a degree in conservation. Outside of the Nature Center, he stays busy with the Five Seasons Ski Team and the Eastern Iowa Circus.

Looking for a career or internship opportunity?

Don’t be shy, get in touch!